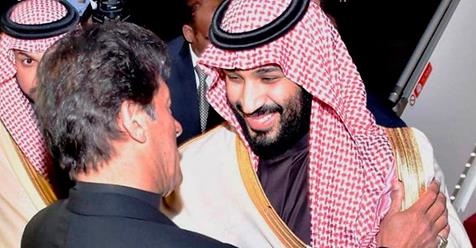 Saudi Arabia has pledged investment deals worth $20bn (£15.5bn) with Pakistan which is seeking to bolster its fragile economy.

The deals include funding for an $8bn oil refinery in the city of Gwadar.

It comes as part of a high-profile Asian tour by the kingdom’s Crown Prince Mohammed bin Salman.

Pakistan is suffering a financial crisis. It has only $8bn left in foreign reserves and is looking to international backers for support.

Prime Minister Imran Khan has been seeking help from friendly countries in order to cut the size of the bailout package his country is likely to need from the International Monetary Fund, under very strict conditions.

The country is seeking its 13th bailout since the late 1980s and Saudi Arabia has already provided a $6bn loan.

Pakistan also said it would confer its highest civilian honour on the Saudi crown prince, the Order of Pakistan, a day after the investment deals were finalised.

The move is at odds with other countries who have condemned the Kingdom over its role in the murder of dissident journalist Jamal Khashoggi last year.

Saudi Arabia and Pakistan signed provisional agreements and memorandums of understanding in the energy, petrochemicals and mining sectors, according to reports.

Of the latest deals, Prince bin Salman said: “It’s big for phase one, and definitely [our commercial relationship] will grow every month and every year, and it will be beneficial to both countries.”

How to Build Trust in a Relationship

Defense Mechanisms of On line Relationships