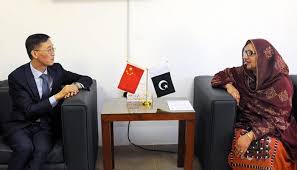 ISLAMABAD: Minister of Defence Production Zubaida Jalal on Wednesday said scope of cooperation between Pakistan and China was vital for the regional peace and security.

Talking to Chinese Ambassador Yao Jing in Islamabad, she said the China Pakistan Economic Corridor was essential for the development in Balochistan.

She emphasized on enhancing cooperation between the two countries for the development in social sector including healthcare and education in Balochistan.

The Chinese Ambassador congratulated the minister on her new assignment.

They discussed bilateral relations especially in the field of defence industry.

Pakistan Yao Jing called on Foreign Minister (FM) Shah Mehmood Qureshi on Monday at the Ministry of Foreign Affairs in the federal capital.

Few days earlier, Prime Minister Imran Khan stressed upon the need for early completion of the CPEC projects and directed the Board of Investment’s chairman to present a comprehensive plan for swift development of special economic zones (SEZs) in the country.