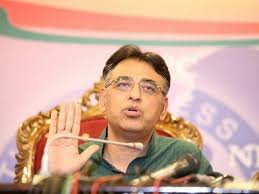 ISLAMABAD: Finance Minister Asad Umar said on Wednesday that talks are continuing with the International Monetary Fund (IMF) and Pakistan is seeking aid from the friendly countries for the last time.

While addressing a ceremony in Islamabad, the finance minister said that the government is working on long-term and short-term strategy.

Umar said that Pakistan and China gave space to a third country to participate in the China Pakistan Economic Corridor (CPEC) plan.

He said that the CPEC is important for the region and the third partner can participate in investment.

The minister said that in April a trade framework contract will be made with Turkey and it will promote trade with Iran and Europe.

Earlier this week, Asad Umar said that the country is not solely relying on the International Monetary Fund for economic relief as it has also made alternative system. The minister said that the IMF has not placed any non-financial condition and it is just an option to revive the economy.