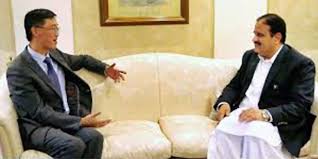 Talking on the occasion, Chief Minister said that China was the most trustworthy country and added that we appreciate Chinese cooperation in the development of a new Pakistan. A new chapter of Pakistan-China friendship has been written in the tenure of Prime Minister Imran Khan. Work has been started on the new dimensions of Pakistan-China economic relations while the CPEC project carries vital importance in the durable development of Pakistan. He said that Punjab government was establishing new special economic zones where Chinese investors will be given incentives and facilities. The public-private partnership will further boost Pakistan-China economic relations, he said.

Chief Minister said that durable development of social sector was a priority of the government and Chinese cooperation in this regard would be welcomed. He announced that people-to-people contacts between Pakistan and China will be further strengthened and we will move forward by identifying the future strategy while considering the new dimensions of CPEC project. He appreciated Chinese cooperation in energy, infrastructural development and other sectors and added that government is desirous of benefiting from latest Chinese technology in agriculture and farming sectors. A conducive atmosphere is provided for investment in Punjab and Chinese investors should take benefit of it, he added.

Chinese ambassador appreciated the establishment of special economic zones by the Punjab government and hoped that Pakistan-China economic relations will be further strengthened and both the countries will benefit from public-private partnership initiative. We want to further extend our cooperation with the Punjab government for the development of social sector. He said that joint steps will be taken to boost public level contracts and China is siding with Pakistan in its journey of development and prosperity.