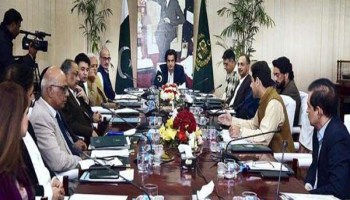 He extended this invitation on Wednesday while meeting with the president of AIIB Jin Liqun and leadership of Chinese companies including China Railway Construction Corporation, Huawei, Norinco and others on the sideline of China Pakistan Economic Corridor (CPEC) 8th Joint Cooperation Committee (JCC) meeting, scheduled to be held on 20th December here.

In a meeting at AIIB Headquarters, Makhdum Khusro Bakhtyar said that Pakistan has received a solid investment in energy generation portfolio; however now Pakistan is encouraging projects based on hydel or renewable resources.

AIIB could explore opportunities of partnership in Dasu and Mohmand Dam projects which are in the planning stage, proposed Minister. “We are introducing integrated energy policy and look for investment in transmission line projects and up-gradation of the distribution system.

Mr. Jin Liqun, the president of the Asian Infrastructure Investment Bank told that projects worth US $ 1.68 billion in the different sectors are being financed by his bank in Pakistan.

He vowed to support transmission line, hydel energy generation and other projects that could support Pakistan’s economic growth.

He informed that a project to support SMEs was already approved and this investment would be enhanced with the passage of time.

Minister, in his separate meeting, invited Chinese enterprises to heavily invest in Pakistan’s industrial, socio-economic, agriculture and transport infrastructure sectors, Minister said that Pakistan and China are agreed on timely completion of CPEC ongoing projects and its future course to explore new areas of cooperation in socio-economic development, accelerating cooperation in industrial and agriculture sector.

Minister said that a framework of cooperation industrial sector would be agreed with China during the JCC.

It would help to boost Pakistan’s industrial capacity through joint ventures in priority areas, relocation of labor-intensive industry and SMEs collaboration.

Minister said that the Rashkai Economic Zone would be implemented in the first quarter of the year 2019 and rest eight SEZs would follow the same line.

Makhdum Khusro Bakhtyar said that Pakistan and China are committed towards the uplift of the less developed areas through initiatives in Socio-Economic Development Sector and Poverty alleviation.

Minister PD&R while highlighting potentials of Pakistan’s agriculture sector, said that the cooperation in this sector promote joint ventures, value addition, cold chain management for fruits and vegetables, marketing and branding that will help the country to overcome its weaknesses.

He was of the view that Pakistan can fully utilize Chinese experiences in corporate agriculture.

Minister further intimated that Pakistan wishes to launch projects in the transport sector with a special focus on the development of ports, rail and roads, through a feasible financial model that may create the least burden on Pakistan’s economy.

Pakistan Railways Main Line One, an economically viable project, is being offered to investors for implementation under Built-Operate-Transfer (BoT) mode, the Minister said. Minister further stated that the economically feasible oil and gas projects would be a good opportunity for investors.

These initiatives, being competitive with a high rate of return, would also help Pakistan to reduce its oil import bill, he added. Makhdum Khusro Bakhtyar said that promotion of economically viable projects would help in creating job opportunities and achieving sustainable growth. Chinese investors showed a keen interest in the development of transmission line, infrastructure projects including ML-1, mass transits system and road projects. Investors are eager to explore investment opportunities in the industrial sector particularly developing special economic zones including Information Technology Zone at Islamabad.