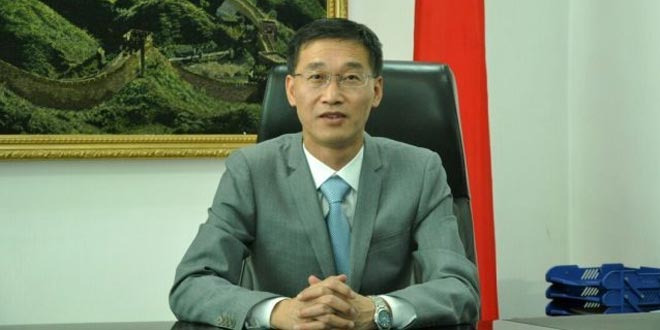 ISLAMABAD: Ambassador of China Yao Jing on Monday said the government of Pakistan should create public awareness to stop deforestation and launch plantation at a massive level to increase the forest cover in the country.

“We were also facing the same issue due to which in the 1990s it was decided to make a green wall in China. As China is a larger country compared to Pakistan, we had more problems but we addressed them by creating public awareness. I am hopeful that Pakistan would also address the issue as the government has shown a commitment,” he said while talking to Dawn after a media briefing held at the Ministry of Climate Change.

The ambassador said it takes time to increase the forest cover but once efforts are started with a full commitment things are surely improved.

Addressing the mediapersons, Mr Yao said Pakistan and China had signed a memorandum of understanding (MoU) under which Beijing would support Pakistan to increase its forest cover.

“The MoU, which was signed during Prime Minister Imran Khan’s visit to China last month, is just a start. It is the 40th anniversary of Chinese development and opening up to the world. We can share a lot for better management of environment.”

He said the Clean and Green Pakistan initiative was not only possible but can make a difference. He said China would support Pakistan in all such projects.

Earlier, Adviser to Prime Minister on Climate Change Malik Amin Aslam said the MoU inked between the National Forestry and Grassland Administration of the People’s Republic of China and the Ministry of Climate Change of Pakistan aimed at enhancing and strengthening bilateral relations in the field of forestry and climate.

He lauded the Chinese government’s environment projects of Eco-Civilisation and Green Wall of China. He said these projects increased the forest cover in China from 12pc to 18pc which constituted 500,000 square kilometres. Moreover, the green wall stopped the spread of deserts.

Mr Aslam said China had supported professionals from Pakistan through participation in training courses on forestry, wildlife, rangeland improvement, wetland management and desertification control in the past.

“Since Pakistan is also in the process of implementing massive afforestation projects, we will get an opportunity to learn from the Chinese experience,” he said.

About the recent Conference of the Parties (COP 24), which was held in Poland and participated by Mr Aslam, he said China took the leading role throughout the conference.

In reply to a question, Mr Aslam said in the past palm trees were planted along with development projects, especially roads and metro bus projects.

“However, we will plant such trees which are environment friendly and help in increasing the forest cover,” he said.