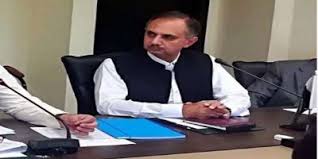 Mushahid says Pakistan & China to jointly counter all challenges to CPEC, 4th CPEC Media Forum calls for ‘Rapid Response System’ to counter fake news
Beijing, November 17: The China Economic Net (CEN) and the Pakistan-China Institute (PCI), in collaboration with the Chinese Embassy in Islamabad, jointly organized the 4th CPEC Media Forum, which concluded today in Beijing . The purpose of the forum was to disseminate factual information on the China-Pakistan Economic Corridor (CPEC), and also to devise a joint Pakistan-China strategy to counter negative perceptions that are generated by vested interests and detractors in the region. A 12-member delegation took part in the event, led by Senator Mushahid Hussain, Chairman PCI and Senate Foreign Affairs Committee.
The Ambassador of Pakistan to China, Masood Khalid gave his opening remarks, where he talked about the stance of the new government on the China-Pakistan Economic Corridor (CPEC), after the conclusion of the Prime Minister’s visit to China. “During the visit of the Prime Minister to China, there are four very important achievements. Both countries have expressed satisfaction with progress of CPEC, both sides are committed to agree to complete the ongoing projects of CPEC, as well as create employment, enhance people’s welfare and promote industrial development. The two sides also agreed to promote the construction of CPEC in the future by taking it to the next phase which will be decided at the upcoming meeting of the Joint Coordination Committee (JCC) of CPEC in Beijing next month, and both sides also agreed to create a social economic development working group apart from a political working group through the two Foreign Ministries.” The Ambassador also emphasized the role of media in disseminating accurate information on CPEC and said that there should be more media interaction between the two countries. “We need to guard BRI and CPEC against the growing negativity of its detractors.”
Senator Mushahid Hussain, Chairman of PCI and Senate Foreign Affairs Committee, talking about China’s peaceful rise, said that there is a shift in the global economic and political power from the West to the East, and China’s peaceful rise and amazing development is an important inspiration for developing countries. the BRI has now spawned a “Greater South Asia comprising South Asia, Central Asia, China, Iran and Afghanistan driven by economy and energy”. The One Belt, One Road is opening the door to a new world with CPEC as its success story since it is the flagship & pilot  project of the BRI. Gwadar Port, centrepiece of CPEC, is now a very active functional port and it is opening up the entire region, not just Pakistan.” He also lauded CPEC’s role, as an ‘irreversible, mutually beneficial strategic project which has national consensus’ in Pakistan’s economic growth rate, saying the highest 5.8% growth rate in a decade is attributable to CPEC, plus the Western route has connected Quetta to Gwadar with an 8-hour road journey. Pakistan’s chronic energy crisis has been controlled, with an additional nearly 10,000 megawatts of electricity since launch of CPEC, and in Thar, coal is being mined and turned into electricity. Citing the importance of media, the Senator said, “Today, we are seeking to establish a rapid response information mechanism through collaboration between Pakistan-China Institute & China Economic Net, which both have the most popular website on CPEC & BRI’. Former Information Minister Senator Pervez Rashid urged the need to counter terrorism and extremism to create a conducive environment for promotion of CPEC. Dr Shezra Mansab Ali Kharal, ex-MNA, spoke about role of women in CPEC, including employment & empowerment of women in Thar where women work as truck drivers.
After the speeches in the opening session, an award ceremony was held titled “CPEC Communication Golden Anchor Awards,” judged by a jury from both Pakistan and China, where winners were presented the awards by Ambassador Masood Khalid for best reporting on CPEC, both in Pakistan & China.
PCI also announced the Rapid Response Information-Exchange Network (RRIN), in collaboration with CEN, using a 3 Cs approach: counter negativity, compare Chinese assistance and CPEC with others since on CPEC there are no political strings attached, and connect the Pakistani & Chinese media, which will use the increased role of media  in disseminating facts and accurate, updated information on CPEC.
Addressing the session on “The Way Forward”, Mustafa Hyder Sayed, Executive Director, Pakistan-China Institute, termed the CPEC Media Forum as a ‘shining example of Pakistan-China Media Cooperation’.
The event concluded with sessions on “CPEC and Pakistan-China Media Cooperation”, “Strengthening Information Exchange between China and Pakistan Media” and “Facts-Based Construction of Narratives on BRI and CPEC”, where media persons from both Pakistan and China gave their input on increasing media collaboration between the two countries.
The event had representation of senior journalists from print, electronic and digital media the top media outlets, government and Communist Party of China officials, parliamentarians, academia and students.
[11:39, 11/17/2018] Sharyar PCI: Summary: The Embassy of China in Islamabad hosted the 4th CPEC Media Forum, organized by PCI in collaboration with China Economic Net. At the end of the forum, PCI announced a “Rapid Response System” to counter fake news propogating against the China-Pakistan Economic Corridor (CPEC). The Forum, held in Beijing, also served the purpose of disseminating factual information on CPEC, and countering any negative misperceptions propogating in the media. Senator Mushahid Hussain, Chairman PCI and Senate Foreign Affairs Committee lauded CPEC’s role as an “irreversible” and mutually beneficial strategic project, which had a major role to play in achieving a growth rate of 5.8%. The event has representation from media journalists, both print and digital, along with Communist Party of China officials.