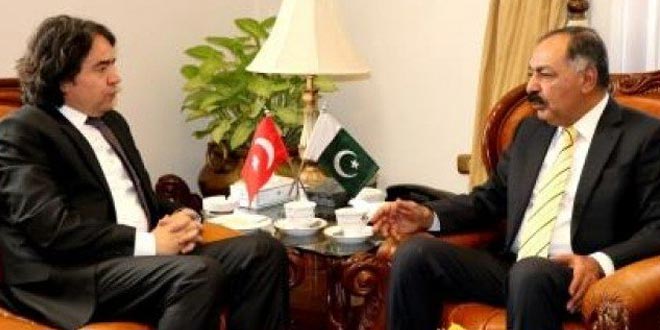 During the meeting matters of bilateral cooperation were discussed, according to an official handout.

“Pakistan and Turkey have strong relations for decades,” the governor said, adding “under the prevailing economic and political changes in the region both countries should enhance bilateral relations for the prosperity of both nations”.

Earlier on Wednesday, the Turkish envoy had called on Chief Minister Jam Kamal at his office. During the meeting the CM lauded Turkey’s support for Pakistan.

The envoy had also visited Quetta Chamber of Commerce and Industry (QCCI) where he met QCCI President Jumma Khan Badezai.
Yurdakul had lauded the China Pakistan Economic Corridor (CPEC) project and said that it would benefit the region.

He highlighted communication on both sides can boost bilateral relations.
The envoy said relations between Pakistan and Turkey have significantly improved and called for mutual interaction of trade delegations and economists between the two countries.
The president welcomed the delegation and said “we perceive Turkey as our second home”.

During the discussion, business opportunities available in the province were highlighted. Badezai invited Turkey to increase the bilateral trade by investing in agriculture and livestock sectors.

Meanwhile, the QCCI former president Salahudin Khilji briefed the delegation about the difficulties in visa policies of the two countries. He stressed the need for ease in the policy to boost bilateral trade.
To this, the envoy said the chamber’s help would be sought in addressing this issue.

Yasinzai said: “Without justice, our society can’t be developed. Supremacy of law is the only solution to eradicate crimes from our soil”. He stressed the need for strong judicial system in society.

The delegation discussed with the governor special grant for lawyers, land for the community and other issues.

The governor assured his full cooperation and support for the lawyers’ community.