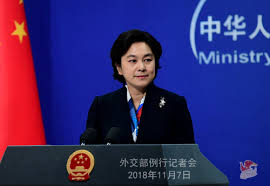 BEIJING: Chinese Foreign Ministry on Wednesday said that China will continue to provide assistance and support to Pakistan’s economic and social development in accordance with the needs of the Pakistani side and through mutual agreement.

The ministry announced that Prime Minister Imran Khan’s visit to China is a success and the two sides made remarkable achievements. They issued a joint statement and gave a comprehensive introduction to the specific results of the visit.

According to the Ministry’s spokesperson Hua Chunying, a number of achievements were made during the visit. First, it has deepened the friendship between the leaders of the two countries. This visit is the first official visit to China after Prime Minister Imran Khan took office, fully demonstrating Pakistan’s emphasis on developing relations with China.

Chinese leaders such as President Xi Jinping and Premier Li Keqiang had friendly exchanges with him and established good relations. The second is to consolidate the special friendly relations between China and Pakistan.

The two sides believe that China-Pakistan relations have experienced the test of time and environmental changes at home and abroad and are constantly moving forward. The two sides agreed to further strengthen China-Pakistan all-weather strategic partnership and build a new era to closer the CMB community.

The third is to expand the strategic communication between the two countries. The leaders of the two countries exchanged in-depth views on bilateral relations and international and regional issues of common concern and reached important consensus.

The two sides also agreed to establish a foreign minister’s strategic dialogue mechanism to plan and coordinate bilateral relations and cooperation in various fields. The fourth is to promote pragmatic cooperation and friendly exchanges.

They also agreed to continue to firmly promote the construction of the China-Pakistan Economic Corridor and establish a social and livelihood working group to promote the continuous expansion of the corridor.

They also agreed to strengthen cooperation in the fields of economy, trade, finance, science and technology, agriculture, humanities, etc., and signed 15 cooperation agreements in related fields. Fifth, it has strengthened coordination and cooperation in international and regional affairs, and emphasised support for multilateralism, free trade, and win-win cooperation, and promoted lasting peace and common prosperity in the region and the world.

Both China and Pakistan are satisfied with the results of Prime Minister Imran Khan’s visit and unanimously agreed to continue to work together to implement the consensus reached by the leaders and push China-Pakistan all-weather strategic partnership to a new level.

To a question, the spokesperson further said at the weekly news briefing, “China and Pakistan are all-weather strategic partners, and the relationship between the two countries has been running at a high level”.