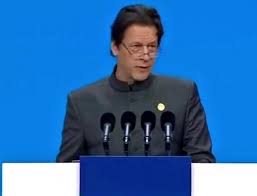 During his keynote address at the Shanghai International Expo, Prime Minister Imran Khan highlighted the significance of China Pakistan Economic Corridor (CPEC), saying China-Pakistan Economic Corridor has opened the vista of opportunities in the region. He added that CPEC is  beneficial for both China and Pakistan and will connect  to Middle East and wider Gulf region.

Prime Minister also shared his party’s slogan of  change which he had introduced during the his  campaign to woo the voters in Pakistan before July 25 polls, Khan said his  government is fully committed  to implement the manifesto  to bring positive changes in the country, adding that the government’s core objective is to establish a system based on  transparency and accountability in the country.

“We in Pakistan are blessed with an abundant array of resources ranging from minerals to fertile land to wealth of renewables and the most diverse landscape with twelve climatic zones. Our industries are already producing high-end textiles, sport goods, engineering goods, IT services and medical technologies including surgical instruments.”

Thanking China for the love and affection extended to him during his visit, PM Imran said the love between Pakistan and China did not only exist on a state-to-state level but could also be witnessed on people-to-people basis.