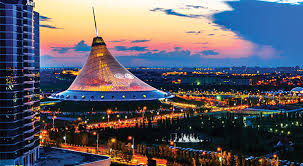 Islamabad: The Ambassador of the Republic of Kazakhstan, Barlybay Sadykov, said that his country looks at the ‘One Belt One Road (OBOR) initiative as a positive initiative which will enhance global connectivity in future.

Ambassador Sadykov was speaking as the guest speaker at a reception hosted by the English Speaking Union (ESU) Islamabad Chapter at the residence of Mr Khalid Malik, the President of ESU Sunday evening. “Kazakhstan fully support this OBOR initiative that was launched in 2012 to connect West with the East. Kazakhstan is already connected with China by railway and it would be a great opportunity to increase connectivity in the region,” Ambassador Sadykov said.

“Similarly,” he said, “the China Pakistan Economic Corridor (CPEC) will turn the KKH (Kara Koram Highway) into an all-weather route and enhance connectivity.” He said that Kazakhstan is the 9th biggest land-locked country, so this connectivity by land routes is even more important for them. Talking about the presence of ISIS (Daesh) he said that there were reports that it was entering Africa and Central Asia. Kazakhstan shares a 40km long border with Afghanistan but according to the international portal on terrorism, the chances of ISIS penetrating into Kazakhstan are minimal.

He said that there was high level of acceptance amongst the majority Muslim population and the minority Russian Orthodox, Roman Catholic and Jews. “It is not the religion that could be blamed for extremism. Initiating dialogue between the religious groups with their leaders participating on such particular issues can always help maintain harmony between them,” Ambassador Sadykov said.

Ambassador Sadykov said that Kazakhstan is a Uranium-rich country and is an exporter of the ore. He said that at the time of independence Kazakhstan has over a thousand nuclear warheads aimed at various cities in Europe. However, President Nursultan Nazarbayev decided not to have nuclear capability.

Ambassador Sadykov spoke about the importance of the English language as means of communication and said that in his country the students are taught three languages including English language.

“We have hosted the OIC summit as well as that of the European Economic Cooperation (EEC). Despite our young age, Kazakhstan was elected as the non-permanent member of the Security Council of the United Nations and our country is actively participating in the issues of international importance through the UN,” Ambassador Sadykov said. In the beginning the Secretary General of the ESU, Mr Abid Ali invited the guests to their seats and invited the ESU President, Mr Khalid Malik to introduce the guest of honour. Mr Malik, on his turn introduced the Kazakhstan Ambassador, Barlybay Sadykov and highlighted his credentials and achievements. He also announced appointment of Aftab Hussain Syed as the Vice-President of the ESU on the occasion.

It was a well-attended reception arranged by ESU in honour of the Kazakhstan Envoy. Prominent among the dignitaries present on the occasion included the Ambassador of the Republic of Egypt, Ahmed Mohamed Fadel Yacoub, the Charge D’Affairs of the Embassy of Japan, Mr Yusuki Shindo, the Deputy Chief of Mission of the Mauritius High Commission, Mr Mervin N. Chedumbaram and the Deputy Chief of Mission of the embassy of Azerbaijan.

The former Deputy Speaker of the National Assembly, Sardar Wazir Ahmed Khan Jogezai, the former Federal Secretary of Parliamentary Affairs, Malik Tahir Sarfraz, Brig. (Retd) Sardar Sajjad, and officials from the Ministry of Foreign Affairs were also attended the reception besides many members of the Executive Committee of the ESU.