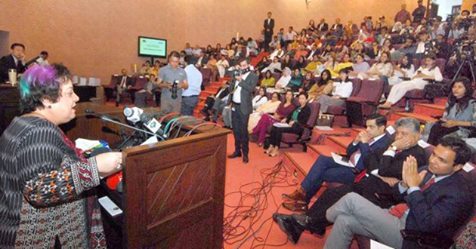 The 6th monograph, titled “Role of Women in CPEC,” was organized by Pakistan-China Institute (PCI) in collaboration with Konrad-Adenauer-Stiftung (KAS), at the Pakistan Institute of Parliamentary Services (PIPS), on the 22nd of October where Dr Shireen Mazari, the Federal Minister for Human Rights has embraced the occasion as Chief Guest.

The inaugural speech was given by the Executive Director of PCI, Mr Mustafa Hyder Sayed, where he mentioned the role PCI has played in disseminating information on key issues pertaining to the China-Pakistan Economic Corridor (CPEC). He discussed the key aspects of women issues in Pakistan, and how important a role CPEC will play in empowering women in the country.

Deputy Chief of Mission, Chinese Embassy Islamabad, His Excellency Mr. Lijian Zhao, spoke at the launch event of monograph “Role of Women in CPEC” said that the women in China have transformed over time attributing to the economic changes in the country and women in Pakistan are going through a similar transformation. He further added that he is very confident that CPEC is a game changer for Pakistan and so it will be a game changer for the women of Pakistan as well.

The chief guest, Dr. Shireen Mazari, Federal Minister of Human Rights, while addressing the audience at the event, appreciated the efforts of Pakistan-China Institute in producing the report on the “Role of Women in CPEC”. She said, “The report is a comprehensive study, which is very well researched and drafted.” Talking about the role of women in CPEC, she expressed gratitude over the increasing opportunities women are getting under CPEC and said that she hopes to see women being included in the vocational and technical trainings being conducted under CPEC. She further added that training women will help them in attaining more employment opportunities within CPEC and this way CPEC will truly be a game changer for Pakistan. Talking about the future of CPEC, she said “The Government is committed to CPEC as CPEC is benefitting the people of Pakistan. Let me make it clear: CPEC has come to stay and we will take CPEC forward.”

The Chairman of the Pakistan-China Institute and the Chairman of Senate Foreign Affairs Committee, Senator Mushahid Hussain Sayed, stressed on the importance of regional connectivity and peace, and said that CPEC has not only become a part of the socio-economic landscape of Pakistan but of the entire region. He said, “Quaid-e-Azam, in an interview to the Life Magazine in January 1948 said that Pakistan is the pivot of the world, placed on the frontier on which future position of the world revolves. This region is the most important region in the world in terms of geopolitics, geo-economics and geo-strategy, and therefore CPEC should no longer be confined to Pakistan and China, rather there should be regional expansion. The success story of CPEC is evident from the results as 22 early harvest projects have been initiated with 9 already been completed and 13 under construction, 70,000 jobs have been provided to Pakistanis because of CPEC, and the highest growth rate of 5.8% in the last 13 years is attributed to CPEC. 26000 Pakistani students are studying in China and 22000 Pakistani students are learning Chinese language.”