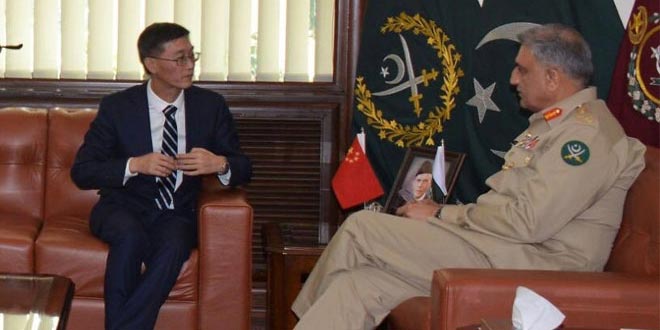 The Chief of Army Staff (COAS), General Qamar Javed Bajwa emphasized the role of the military in providing security cover to the projects under the China-Pakistan Economic Corridor (CPEC). In a meeting with the Ambassador of China to Pakistan, H.E. Yao Jing, he said that CPEC’s timely implementation is imperative for the future success of Pakistan’s economy, and the Pakistan Army is fully committed in overlooking its smooth progress. The recent visit of the Chinese Foreign Minister was also discussed in the meeting.

RAWALPINDI:Chief of Army Staff, General Qamar Javed Bajwa has reiterated that China Pakistan Economic Corridor (CPEC) is the economic future of Pakistan and its security shall never be compromised.

The Ambassador appreciated conduct of successful visit of Chinese Foreign Minister and support for CPEC in Pakistan.

The Army Chief reiterated that CPEC is eco future of Pakistan and its security shall never be compromised.