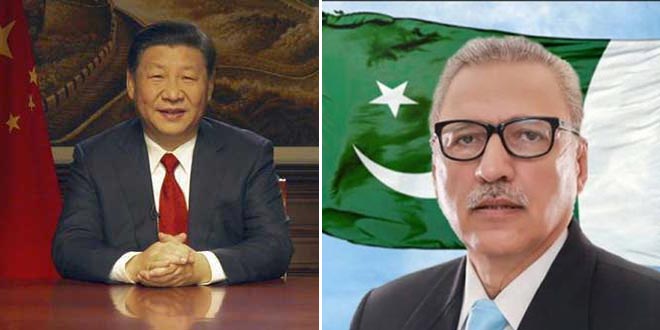 President Xi Jinping congratulated Dr. Arif Alvi on his successful appointment as the 13th president of Pakistan. While congratulating the newly-elected president, Chinese President Xi emphasized strong ties between China and Pakistan and how the ‘iron bond’ between the two countries will continue to grow despite any irregularities in the domestic situation of both the countries. He further added that the success of CPEC can be attributed to the joint efforts and greater trust put in by both the countries. The Chinese President expressed his confidence in Pakistani government and willingness to work with Dr. Arif Alvi to take Pakistan-China relations forward.

BEIJING: Chinese President Xi Jinping on Tuesday sent a congratulatory message to Pakistan Tehreek-e-Insaf’s (PTI) Dr Arif Alvi on his victory in the presidential election and subsequent assumption of the office.

In his laudatory message, Xi said the Sino-Pak friendship, which remains solid, also keeps growing despite the oscillating international situation. China and Pakistan are good neighbours and friends, treat each other with all sincerity as brotherly nations, and share in each other’s weal and woe.

The Chinese head-of-state noted that the two countries had decided to jointly enhance their bilateral relations to an all-weather strategic cooperative partnership during his last visit to Pakistan back in 2015.

In recent years, with both sides’ joint efforts, the mutual political trust is stronger and the construction of the China Pakistan Economic Corridor(CPEC) is fruitful, not only benefiting the two peoples, Beijing, and Islamabad but making a positive contribution to the regional peace and development, he added.

Xi said the strategic significance of the Sino-Pak linkages relations was in the limelight under the current circumstances, and that the two states should support each other more staunchly and conduct deeper cooperation.

Mentioning the high value he places on the growth of the amicable links, he said he was willing to join hands with Alvi to further enhance the all-weather partnership and build a closer community of shared future.

Earlier in the day, the Chinese Foreign Ministry also wished Alvi well on his election as Pakistan’s 13th President.

“We greatly value our friendly relations with Pakistan and we will join efforts with the country to scale new heights of our all-weather strategic cooperative partnership,” Hua Chunying, the spokesperson for the Foreign Ministry, said during a regular press briefing.