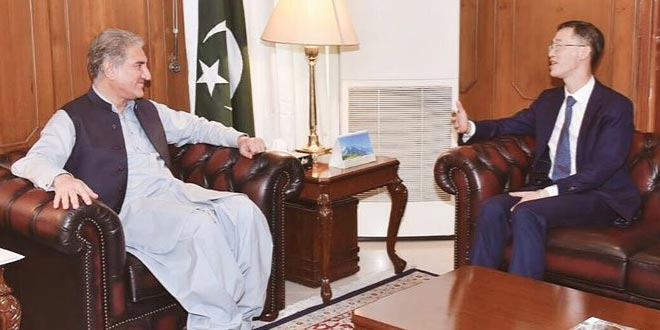 The Ambassador of China to Pakistan, H.E. Yao Jing, has been very active in promoting bilateral relations between Pakistan and China, especially in terms of promoting the China-Pakistan Economic Corridor (CPEC). In a series of meetings, the Ambassador first met with the Prime Minister Imran Khan, to discuss mutual cooperation under CPEC between the two countries. He also met with the new National Assembly speaker Mr. Asad Qaisar and the new Foreign Minister, Mr Shah Mehmood Qureshi. In both the meetings, the way forward was discussed between Pakistan and China, with emphasis on implementing CPEC at fast pace. Other matters such as trade and industry were also discussed, with emphasis on the implementation of legislation.

ISLAMABAD: Chinese ambassador Yao Jing met Defence Minister Shah Mehmood Qureshi and National Assembly Speaker Asad Qaiser on Monday, where he congratulated them on assuming charge of their respective offices and discussed matters pertaining to prosperity in the region.

Earlier in the day, Yao Jing visited the foreign office in the federal capital where he met Qureshi.

Later, he met the NA speaker where they discussed the importance of ties between China and Pakistan for regional peace and stability.

During the meeting, Qaiser told Yao Jing they would work on taking relations between both the countries to new highs.

“Pakistan-China friendship has passed all tests and both the countries have supported each other on all international forums,” the speaker told Yao Jing. “Ties between the naighbouring countries are based on mutual trust and respect.”

About the China-Pakistan Economic Corridor, Qaiser told the Chinese ambassador that the project promises opportunities for the entire region, which is why the Pakistani government will take all possible steps for its complete and successful implementation.

They also spoke about bilateral trade between Pakistan and China, saying the issues would be solved with the help of legislation.

Yao Jing said China values its relations with Pakistan and wants to work with the country so that together they help the entire region progress.